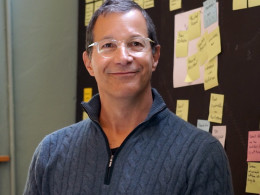 We’re continuing to build out our leadership team here at Ivy Softworks, and today I am absolutely giddy with excitement to announce that Mark Zbikowski has joined us as a Managing Principal!  Mark was originally introduced to us by Brian Valentine, as someone who is both a great technical leader and loves to get his hands real dirty building out architecture and products.  As soon as I met Mark, I knew he belonged here as a key leader of our engineering team.

Prior to joining our team, Mark spent over 25 years at Microsoft architecting some of the most iconic brands in the company’s history from MS-DOS to Windows Vista. After Microsoft, Mark served as a technical advisor for many local Seattle companies, as well as sharing his deep knowledge of operating systems with budding engineers at University of Washington.

One of my favorite bits of geek trivia about Mark - his initials (0x4D 0x5A in hexadecimal) are the first two bytes of every PE-format .EXE on Windows.  One could even go so far as to say that Mark left quite a mark on many important Windows internals!  Heh, a bit of nerd humor there.

I’m incredibly excited to welcome Mark on the team, and now let’s hear from him directly why he chose to join Ivy Softworks.