A year ago I would have defined myself as a Culture Joiner: a good person with good ideas but mostly just looking to ride the modern experience of start-up wealth and privilege. I wanted to be doted upon, with the usual free laundry service, affirmation circles, and pizza Fridays, much more than I wanted the hard work of starting from scratch. And being totally honest, I wasn’t at all stoked about leaving behind my beloved San Francisco to move up to Seattle.  On the flip side, though, I started to see Ivy Softworks less as a compromise and more as something very special and unique: I was being given the opportunity to handcraft a culture from scratch, alongside some carefully chosen badasses.  That by itself just seemed incredible to me: how often does anyone ever get the chance to skip past inheriting someone else’s compromised culture, and instead build one fresh and new, with the people they care about, around the values they think are most important?  Never, for most. Thus began a pretty significant shift in my mind, from being a Culture Joiner to a Culture Builder.

I moved up to Seattle in May of 2013 and left behind friends, community, and a Master’s degree program, for this once in a lifetime opportunity to be on the ground floor of something big – and so far I have no regrets. We are a group of people who understand that changing the world requires both grit and empathy, and that building up the people around us is just as important as building world-class products. As Office Manager and Keeper of the Cultural Flame, I recognize that the workplace is a dynamic ecology that needs to be nourished in large and small ways in order to flourish. I lead the office from the idea that we must leave people and relationships better than when we found them, because the day-to-day way we treat each other and interact with the world around us will make or break our happiness – which is ultimately where our own longevity derives from. That includes people we hire and don’t hire, the folks that deliver our packages and lunches, office neighbors, contractors, and recruiters – everyone we touch is part of the Ivy Softworks family. 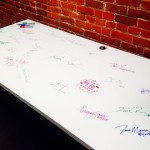 As a team, we thrive on collaboration that acknowledges and expresses gratitude spontaneously, thoughtfully considers each individual’s opinion, values feelings, appreciates ideas, and rewards hard work, smart work and commitment.  Eight months into co-creating Ivy’s culture, I can say it’s clear that we are a company invested in emotional evolution and personal development as much as we are in technological innovation and building fantastic products. We use the strengths of employees to harness individual and group potential, rather than focus on their weaknesses as something broken needing to be fixed. Everyone here fundamentally believes that this leads to our greater collective creativity and inventiveness, while at the same time making us more productive and effective.

We all start off as strangers, but if we’re successful, we’ll all end as Family. We will succeed and fail together. In our world there really is no free lunch, so if your panties get in a bunch over the absence of food carts and free onsite hair cuts, then this is not the place for you(though I will say that our snacks do kick serious ass, we have a lot of fun together and we make sure the music playing is always great). However, if you’re more interested in what you can contribute to a culture instead of what you can take from it, then you are in fact a Culture Builder. And you are One of Us.

Take a look at our open jobs and experience the magic yourself!